Growing up in the Accrocco house, special occasions were commemorated at an esteemed local bistrot called The Ponderosa. I've included a link in case you were wondering whether this chain is still going strong. At the Ponderosa Buffet & Steakhouse, you could have it all. Nachos commingling with hard boiled eggs, and other loose toppings from the salad bar, including but not limited to: cottage cheese, croutons and at least ten black olives (one for each finger).  No meal was complete without seven or eight plates of over-portioned and half-eaten piles of mac n' cheese, fried chicken skins and other nameless bits of white mush. Dinner was punctuated by a sickening mixture of every sugary confection on the treat bar, smothered in a shapeless avalanche of swirled soft serve.

A sophisticated ten year old, celebrating his tenth birthday decided as a new adult he would try something a bit more refined from the buffet. It was there he began his short-lived love affair with fried clams. Later that night when he was projectile retching on his way to the bathroom, he wondered whether he had a shellfish allergy. Being able to say he was allergic to something, even as random as shellfish, seemed very grown up. Maybe it was because the clams were on the buffet at the Pondergrosa, or maybe his allergy was real? Sixteen years later, his suspicions were confirmed after about twelve too many steamed mussels on a third date.

Parents between years 1978 and 2005 loved places like Ponderosa because it was fancy enough that they could enjoy their nice steaks but affordable enough that their brats could bicker two booths over. The day eventually came however, when the once elegant family steak house by the new mall, decayed into that sad little place where a girl in your middle school math class' stepdad hid a body in the meat locker. 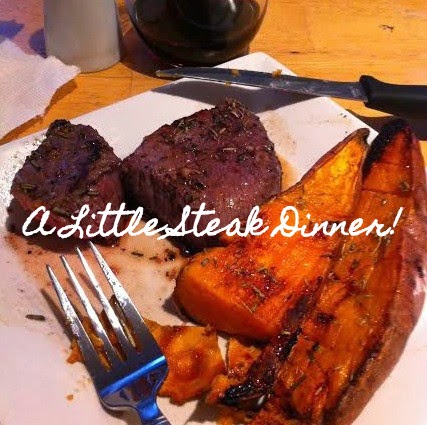 Nope, I didn't have to win the lottery, and neither do you to enjoy a klassy stayke dinner! An essential ingredient to Ponderosa's success was probably genetically engineered steaks that were un-fuck-up-able. Steak is just too gosh-darned expensive to screw up. Seasoning is everything. As long as it tastes good, it could be shoe leather for all I care. The cut of meat is also pretty important. Don't buy the scrawny little paper-thin steak and tell me you're trying to romance my stone. You bought the cheap steak and I'm not paying it.

When it comes to girl's nights, my cat and I prefer a nice steak dinner if we're feeling especially proud of ourselves. My favorite cut isn't the filet actually, but the eye-of-the-round. It's always affordable and it has that unmarbled beefy thickness of a filet without the $10/lb price tag. As for marinades, go simple and you won't be disappointed by uncomplimentary flavor profiles. I've been using this one for years, and nobody minds. Make sure to soak meat for at least six hours, or like thirty minutes. Step 1: Tenderize steaks with something heavy. Soak meat in red wine, garlic and rosemary. Occasionally baste the meat as it marinates. 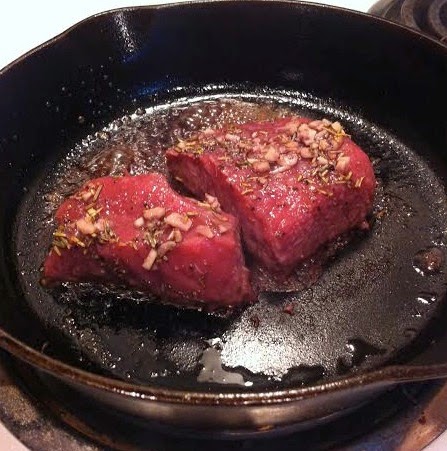 Step 2: In a cast iron skillet (or any skillet), melt a good amount of butter. Quickly brown meat on both sides. Pick a side and let it sit for 4-5 minutes. Turn and cook another 4 minutes. There's an old trick for cooking steak to order, something to do with pinching the side of your hand. I don't know how it works, so don't be surprised if your steak is a little bloody in the middle. 5 minutes per side for a medium to medium-well steak.

Serve with other stuff. 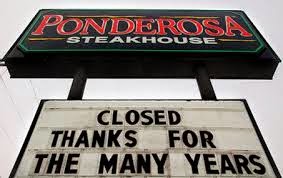