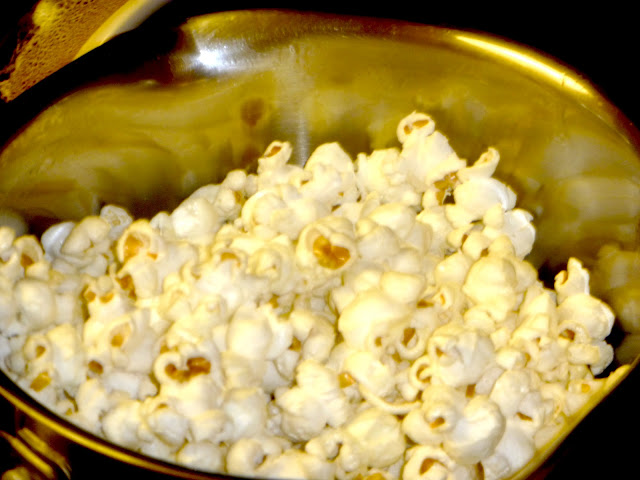 There's nothing worse than being at a dinner party when the booze runs out. Even worse than being a guest at a dry dinner party, is being the hostess of a dry dinner party. From my experiences as both hostess and guest in this situation, I've learned that mid-twenty year olds are apparently incapable of taking card and board games seriously. Alas, to keep the party going one must resort to shutting everyone up by popping a movie in. I won't tell you what to watch, but I will outline some helpful suggestions about what not to watch.

Popcorn is a really cheap snack, unless you're at a cineplex. For some reason, I only like it with movies, or when I smell it. I hate how it gets caught in your teeth and that crap from a bag always tastes like butter flavored styrofoam. Microwavable popcorn is also a carcinogen, I've heard. Making it is quite easy, almost easy enough not to need this recipe. This recipe comes courtesy of my plus-one, who is a professional popcorn maker.  He recommends substituting the olive oil for grape seed oil to cut back on the calories.

You Will Need the Following:

-> Heat deep pot (laugh here) on burner until warm. Coat bottom with oil and allow to heat. Throw in a few tester kernels and wait until they pop. Once popping, toss in the rest of the kernels, cover pot with lid and shake a bit. Once kernels start to pop wildly, reduce and occasionally remove from heat to prevent burning. Don't lift the lid until the popping has stopped. Toss with a little more oil and plenty of salt & pepper. *Cats love popcorn, but it makes them yack - encourage guests to be tidy.
Posted by John J. Accrocco at 12:30 PM