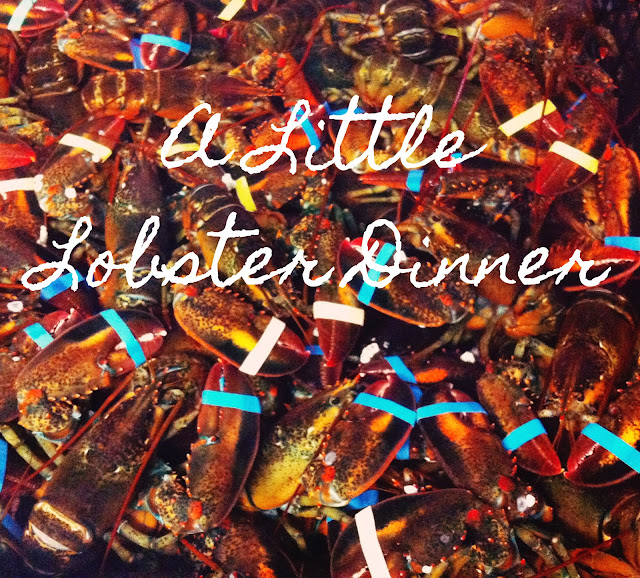 Sometimes I can afford to go on vacation. When I do, I prefer places I don't have to see anyone in a swim suit. I've always wanted to visit Maine and when my plus-one had a summer stock opportunity in Bar Harbor, I tagged along like a cheap groupie. I was told it would be like Dirty Dancing, and it was. I carried a watermelon, had an abortion and became a world class dancer in less than a week. The dancing was coincidental because he was actually doing improv comedy for a theatre in Bar Harbor called ImprovAcadia. It's a charming comedy club that employs and houses Chicago comedians (and comedian hangers-on) for a few weeks at a time.

In my mind Maine and lobster are inextricably linked. In fact, I have a Pavlovian reaction whenever I so much as hear the word lobster, I start to salivate and wipe away phantom butter dribbles. Maybe my obsession with this delectable crustacean is because I was born in the Midwest and the closest I ever got to a lobster was a chain restaurant by the mall. Since most of the world's lobster comes from the Maine harbor, it's real cheap along the coast. With this in mind, I spent weeks looking forward to seven days of lobster. I mostly succeeded. While it's pretty affordable, the best place to have your basic, no-frills boiled lobster 'n sides are lobster pounds. As cute as it sounds, they're basically lobster concentration camps. As long as you keep in mind shellfish are just seabugs without a central nervous system to feel pain, they're delicious! Personally, I like any place I can demand to have something killed on my account. I can't really take any culinary credit here, but sometimes it's nice to have a dinner party in different part of the country!

The lobster pound our host recommended was closed for Jesus.  Instead we ended up across the street at Down East Lobster Pound and it was just as good as I bet the other one is. 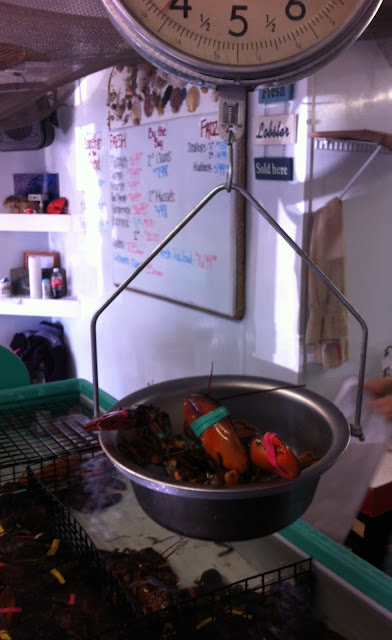 Walking into the lobster shack was kinda like walking into a tackle box, but in a good way. It smells funky, but there are open tanks crawling with lobsters! You tell the gal what size you'd like and she throws it on the scale. We're talking $6 per pound! Prices do vary by day but they're usually always posted. *"chix" are small lobsters and "cawls" are one-armed lobsters - scratch and dent* 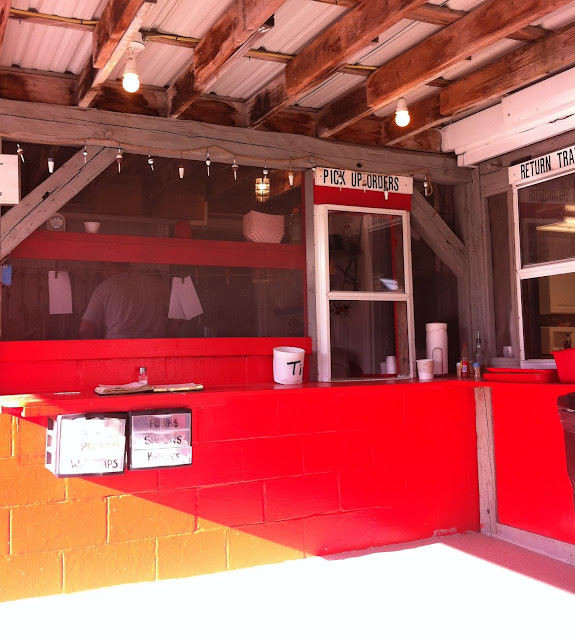 After you've selected your sacrificial lobster, you wait at a window (like a pool concession stand) until it's thoroughly dead. "Numba fooouuurrr!" 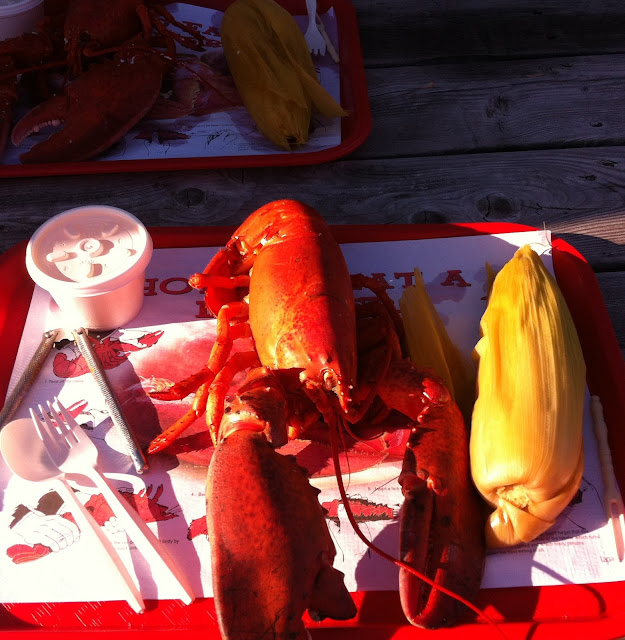 Toss your numbered chip into a bucket and they give you this steaming tray of delicious. Now strap on your plastic bib and get comfortable with the provided tools. 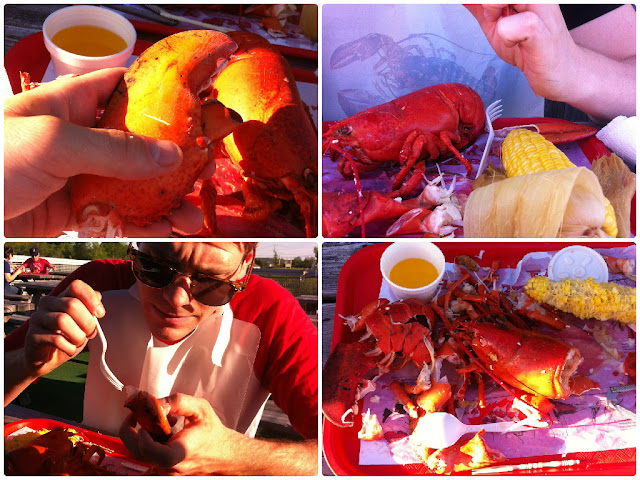 Take your pictures now because once you're knuckle-deep in lobster meat, you won't wanna touch your phone. It's not as easy as it looks. At one point lobster meat went flying over my head, but I'm not too proud to eat off the floor. 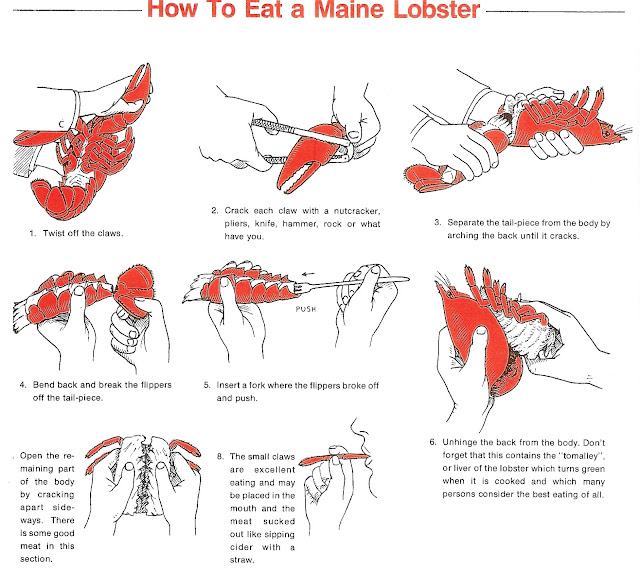 Suck those legs clean. There's no wrong way to eat a lobster, but most places provide this instructional placemat, which will come in handy once it's soaked in butter and seawater. Its main purpose is to catch all that nasty tomalley. 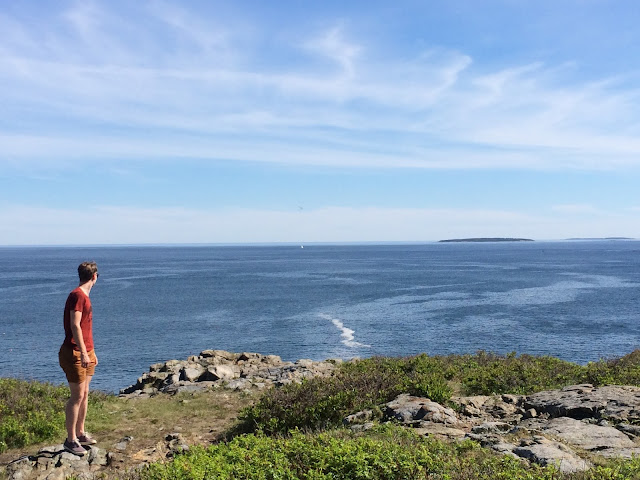 My week in Maine was amazing. I left relaxed, broke and fat. The only day I missed out on that sweat meat was the day I went out on a lobster boat tour, but later that day I ate a scoop of lobster ice cream. It's real! And it's awful!
Posted by John J. Accrocco at 11:37 PM